How to Sell the Next Step, Not the Entire Staircase 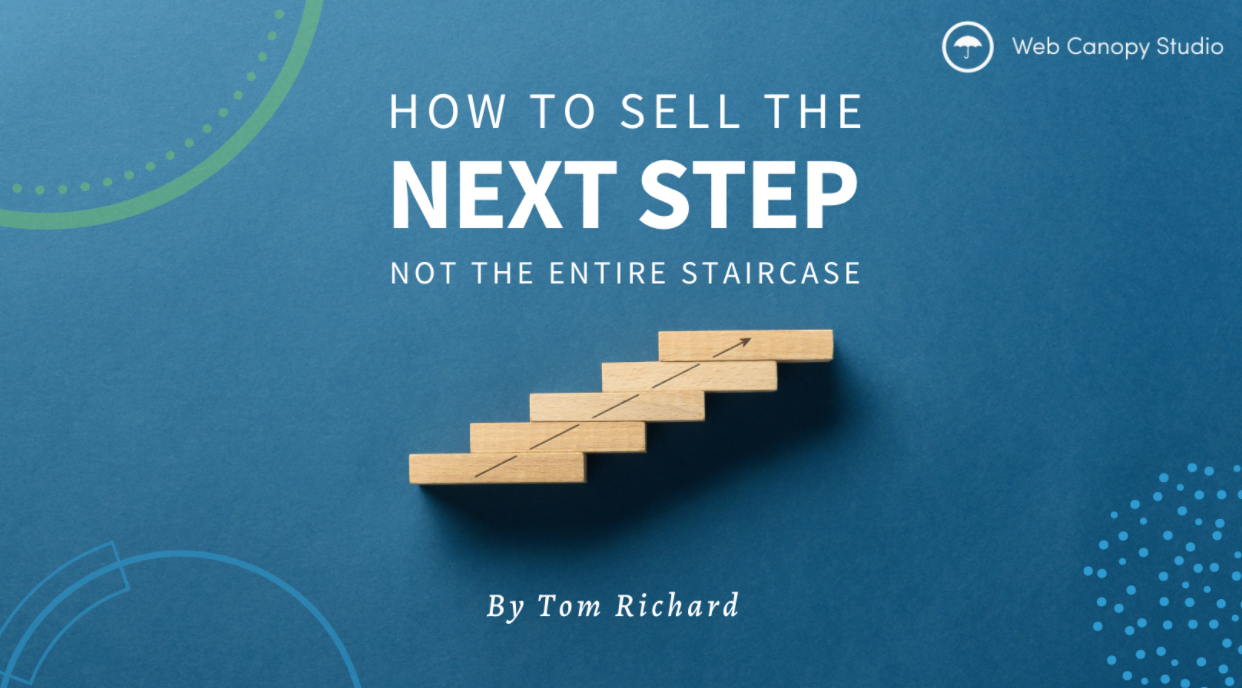 When you think about the idea of “selling the next step, not the entire staircase,” it seems fairly obvious, right?

And yet, it’s something that most salespeople struggle with.

So yeah, salespeople – this blog post is for you.

As a sales rep, you must have the ability to see the whole staircase but FOCUS only on the next step that you need to take. While this may seem obvious, when many salespeople get positive feedback, they lose focus because they start to see dollar signs in their heads.

However, you must remain focused on both the whole staircase AND the immediate next step. This is the only way you'll be able to be a trusted guide up the staircase with the potential client.

I was recently on a sales call and the prospect is going on and on about needing help with content, lead generation, a new website, paid ads, and so forth. Any sales rep is going to be excited about what they’re hearing, right?

So in this case, I was listening to them run around the room with all of the things they think they needed and I knew I had to help them get out of their own head. I need to redirect them into thinking only in terms of their next step, which might not be the step that they think they need to take.

So I asked them, “What’s the #1 metric that measures the success of your business?”

Now, it would have been really easy to listen to them and pitch them and come back a couple of days later with a contract worth $100,000 that includes everything they told me they needed.

But how do you think that would have been received?

If you had this conversation with me 10 years ago, I probably wouldn’t have had the discipline to focus the conversation away from the big things and into the right things. I had been on so many calls where I made pitches like that and after doing it thousands of times, you realize that you’re not actually going to get the sale – you’re just playing fetch in someone’s abstract mind.

You need to look past that manic energy and figure out what they’re really saying.

“I need to expand my social presence.” To do what?

“I need to generate new leads.” For what?

What they’re really saying is, “I have a problem with my business and these are the things that I think are going to fix it.”

When you hear stuff like that, challenge them on it. “If you had a new website right now, today, how would that improve your business? Walk me through it.”

Sometimes, people just get so caught up with the noise that they forget the basics: understand who your target audience is and then build a machine that turns them into customers.

Of course, it’s not going to happen overnight. That’s why it’s so important to think in terms of the next step, not the entire staircase.

As a sales professional, that’s your job. Forgive the cliches, but a bird in the hand really is worth more than two in the bush. Take something tangible, real, even small, and then build on it.

You're going to differentiate yourself from all your competitors because if they come in with a razzle-dazzle show with flashy stuff, and you're there with gritty, provable, results laid out in a linear way, you're going to win those deals.